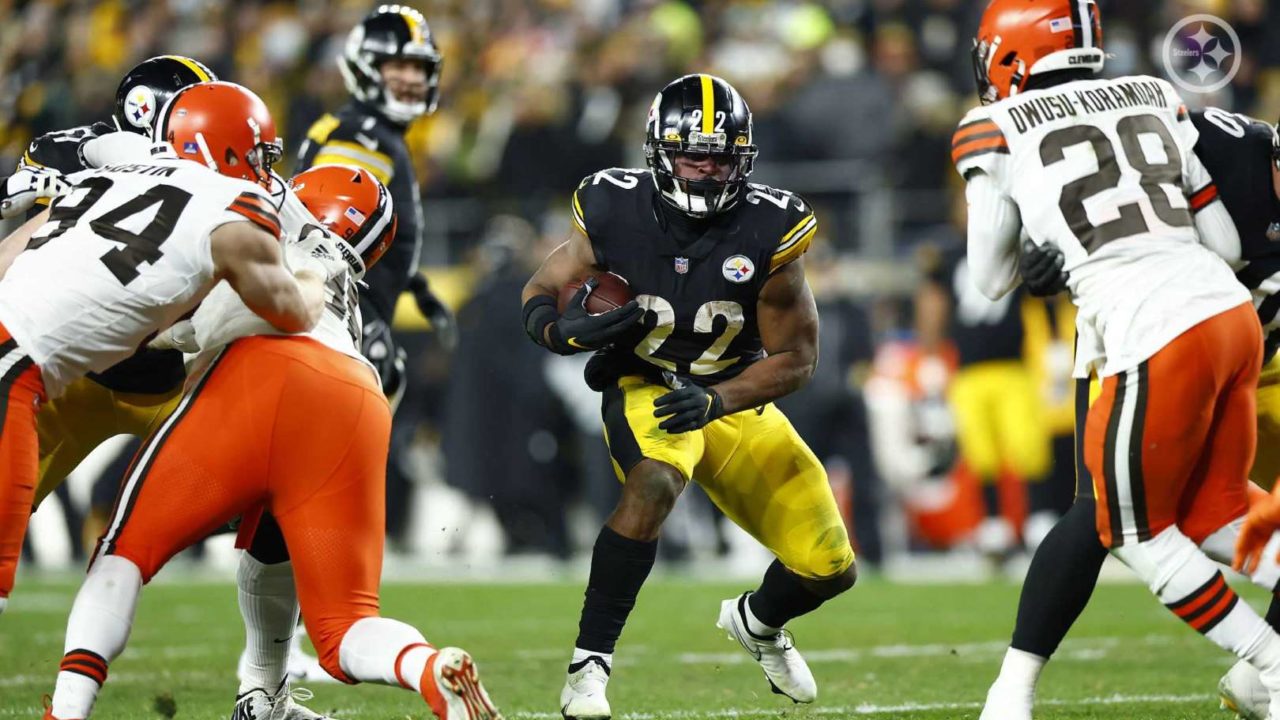 Entering the 2021 offseason, the Pittsburgh Steelers were focused on fixing their run game. Everyone who had an opinion on the matter assumed that would mean a lot of attention given to their offensive line, but the organization opted to go in another direction with their first two selections of the NFL Draft.

Those picks were criticized but also proved to be a difference-maker despite what happened with the front five on offense in the regular season.

As pick 24 of the first round loomed closer and closer, the Steelers watched as five different offensive linemen were selected, with Virginia Tech’s Christian Darrisaw going to the Minnesota Vikings at 23-overall, and the Steelers going on the clock next.

At this point, would the Steelers choose a center to replace the retired Maurkice Pouncey? Would they dare think about a quarterback? With five others already off of the board, that was unlikely. All signs pointed to a favorite prediction that was tied to Pittsburgh all along: Alabama RB Najee Harris.

With James Conner a free agent, and having left to sign with Arizona, the Steelers backfield now had its bell cow replace of a running back. Harris would be the first at his position drafted, but would also start a run that saw Clemson’s Travis Etienne and North Carolina’s Javonte Williams both taken within the next 11 picks.

Had the Steelers not taken Harris, there’s little doubt he would’ve been gone before they went back on the clock with pick 55 overall in the second round.

Some of the targets early on day two of the draft included Landon Dickerson and Creed Humphrey, both highly touted college centers.

Several other tackles fell out of the first round, however, when it came time for the Steelers to decide on whom to take next, Dickerson and six more offensive tackles were already off of the board.

The Cleveland Browns also took a versatile inside linebacker that the Steelers may have had their eyes on too, selecting Notre Dame’s Jeremiah Owusu-Koramoah three picks before Pittsburgh was set to make its own choice.

Ideally, the stage was set for the Steelers to take Oklahoma center Creed Humphrey, but they instead shocked everyone by snagging perhaps the most versatile tight end in the draft, the second taken overall, with Penn State’s Pat Freiermuth.

While Florida TE Kyle Pitts made headlines as the highest-drafted tight end ever, going fourth overall to the Atlanta Falcons, he appeared to be more of a generational talent, particularly as a receiver – while Freiermuth offered his own crazy catch statistics in addition to being a physical and willing blocker.

Critics panned the two picks as Pittsburgh passed on addressing their o-line, but both Harris and Freiermuth would play vital roles throughout the season. Arguably, the Steelers don’t make the postseason without their contributions, including Freiermuth’s heroics –a fourth-down circus catch touchdown at the Cleveland Browns, for example.

Harris would be named a Pro Bowl alternate as a rookie after becoming the first Steelers back to top 1,000 yards rushing since Le’Veon Bell did so in 2017.

Harris would finish the season with exactly 1,200 yards on the ground and 7 rushing touchdowns. He added another 467 yards and 3 touchdowns receiving as well, to combine for over 1,600 yards of all-purpose offense and 10 total TDs.

Freiermuth would finish third on the team in receptions with 60 catches and third in receiving yards with 497. His 7 receiving touchdowns were second to only Diontae Johnson’s 8 on the year.

Regardless of how you felt about Pittsburgh addressing their OL concerns, the fact remains that Harris and Freiermuth represent a youth movement that could become the foundation of the franchise for the next decade.

And it’s not as if the Steelers didn’t have more draft picks to use to address the offensive line in the later rounds: more on that to come in our next edition of the 2020 Steelers Recall series!