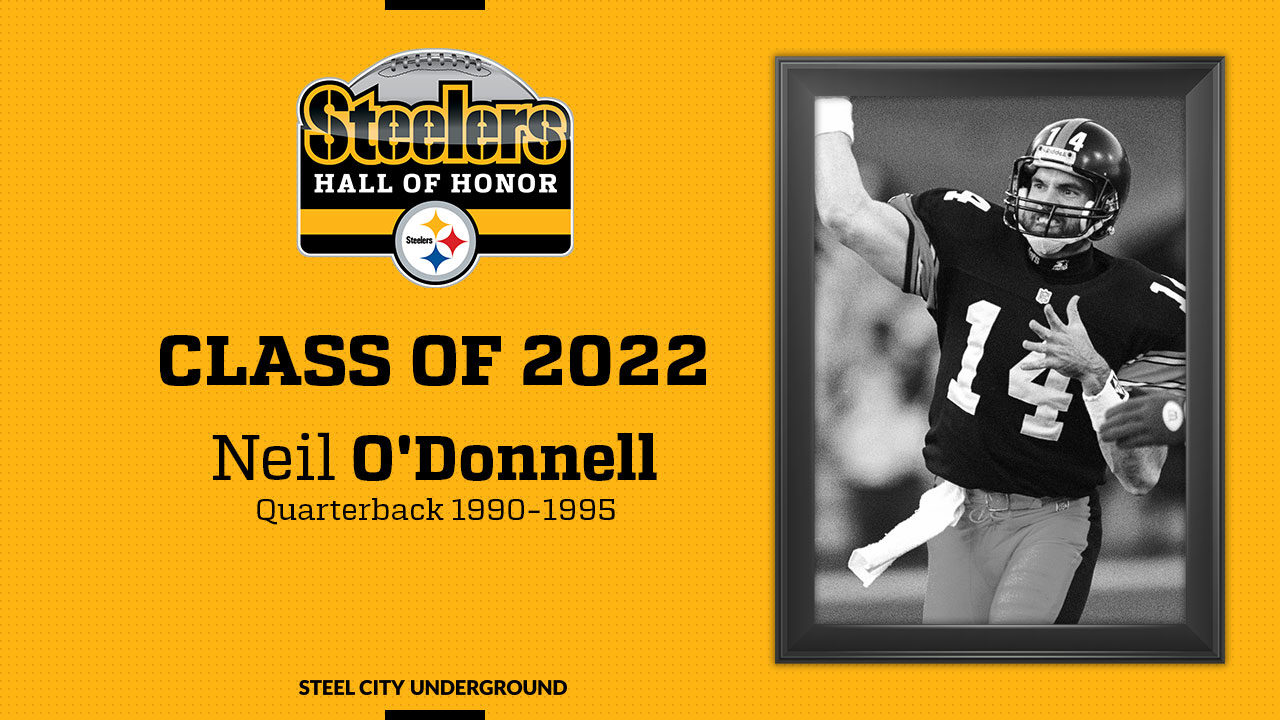 Steelers to induct Neil O’Donnell into 2022 Hall of Honor

With the hysteria surrounding quarterbacks and the Pittsburgh Steelers, the first name released as part of this upcoming season’s Hall of Honor class in a throwback to two Hall of Fame coaches, Chuck Noll and Bill Cowher.

With Ben Roethlisberger’s retirement following an 18-year career, it only made sense that the organization recall a time when the quarterback position was last stable before Big Ben came to town.

Of course, Roethlisberger will eventually find his way into the same Steelers Hall, as well as another prestigious one, but he will have to watch from the sidelines since the requirements for Pittsburgh’s franchise award for players is as follows:

With a plethora of other franchise greats already inducted into the Hall, Steelers President Art Rooney II felt it was long overdue for this next member to have his name immortalized: Neil O’Donnell.

It’s time we acknowledge what Neil was accomplished during his time in Pittsburgh, rather than dwell on the negatives. We believe the timing has never been better for this reunion. Time heals many wounds and we believe the fanbase is ready to appreciate the good that Neil has done in a Steelers uniform as well as for the local community.

The timing comes on the heels of the Steelers brass patching up other past relationships, including those with Terry Bradshaw, James Harrison, and Troy Polamalu, who all had personal issues with the team over the years but have since made public appearances in light of those disagreements.

Rooney II is correct in stating O’Donnell’s contributions to the team far overshadow a single misstep or two that made Dallas Cowboy Larry Brown one of the highest-paid free agents the following season. Rather, Neil should be celebrated for taking the reigns from his predecessor Bubby Brister, and ushering in a new era of Steelers football.

A third round pick drafted in 1990, O’Donnell would sit out his rookie season before being called upon to takeover for Brister in Week 6 of the 1991 season: the last of legendary coach Chuck Noll.

O’Donnell would have ups and downs, but finish the year with 1,963 passing yards including 11 touchdowns to 7 interceptions, with his best game being a 309-yard, 3 touchdown performance in a thrilling 33-27 road win over the Cincinnati Bengals.

In 1992, O’Donnell would be named the starter under new Steelers head coach Bill Cowher. It would be Neil’s best year, as he threw for 2,283 passing yards, 13 touchdowns, and 9 interceptions while being named to the Pro Bowl.

During his tenure, O’Donnell was courted by outside teams such as the Tampa Bay Buccaneers and New York Jets, with the Steelers successfully staving off offers to steal their franchise quarterback by making him the highest-paid player on the team: a contract which, at the time, doubled that of Rod Woodson’s.

Despite the manner in which his time in Pittsburgh ended, it was recently revealed that Bill Cowher had attempted to bring Neil O’Donnell back in the early 2000’s before going with Tommy Maddox as the starter and eventually drafting Ben Roethlisberger.

O’Donnell finished his tenure with the Steelers as the team’s second all-time in career wins by a quarterback, behind Terry Bradshaw. He has since been passed by Roethlisberger and Kordell Stewart.

As a nod to his contributions, and as they have done with other unofficial jersey number retirements, the Steelers have yet to reissue O’Donnell’s number 14 to any other quarterback since his 1995 team MVP season.

O’Donnell remains a franchise great. He is currently fourth all-time in passing yards with 12,867, which is nearly half as many in five years as Terry Bradshaw had in 14. He is tied for second with most 300-yard passing games, fourth in attempts, completions, and touchdowns, and has the second-highest QB rating in team history (second only to Big Ben).

However, Neil O’Donnell shall no longer have the long shadow of that game cast over his place in Steelers history, as we here at Steel City Underground wish him and our readers a Happy April Fools’ Day! (And maybe Neil will someday receive forgiveness from the fans!)