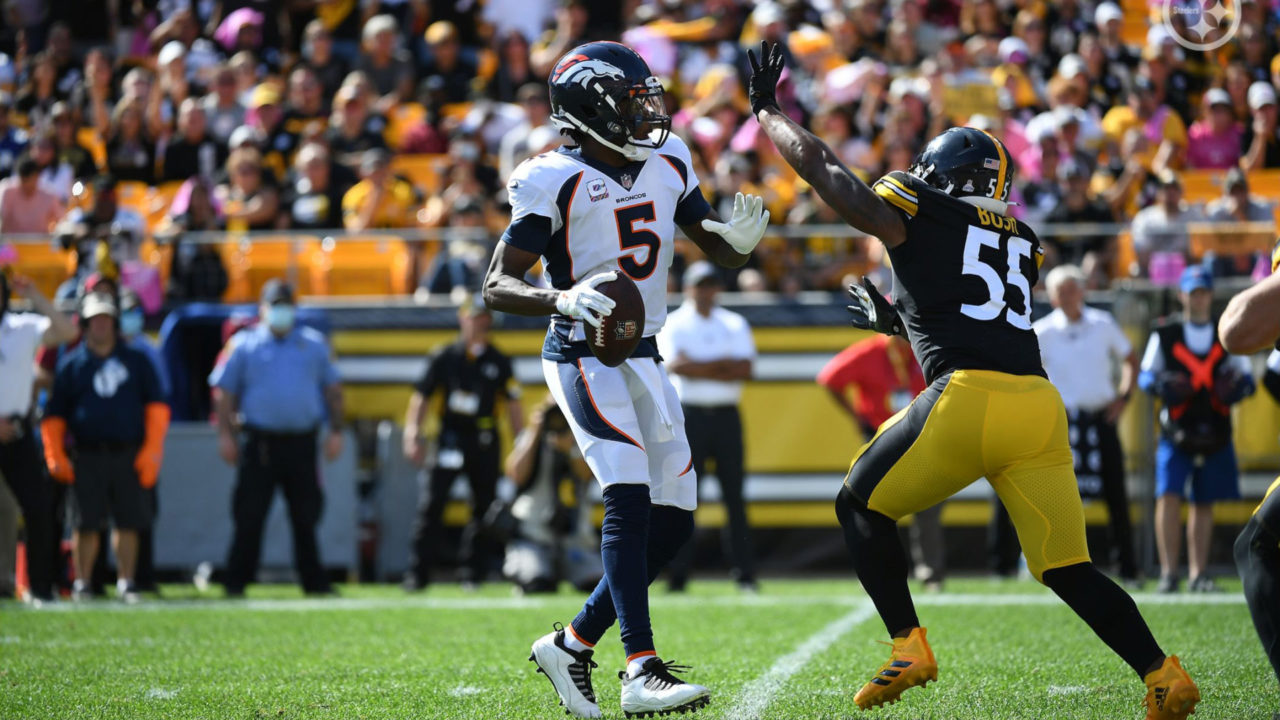 Following a three-game losing streak that saw the Steelers drop games to the Raiders, Bengals, and Packers, things were looking dismal as they returned to Heinz Field in Week 5 to host the streaking 3-1 Denver Broncos.

Looking back, you have to recall that most people didn’t consider the Bengals or Raiders to be contenders – or even playoff teams – during the first quarter of the 2021 season. While we know that’s not true looking back in hindsight today, the 1-3 Steelers were given little chance to pull off a victory even within their home building this time around.

The Steelers entered Week 5’s game as an underdog… at home!!

People were also talking about the demise of Ben Roethlisberger, who would also silence his critics with a performance for the ages – throwing for two clutch touchdowns and finishing his Sunday afternoon with a 129.9 QB rating.

The Steelers offense was way more in-sync, and seeing Roethlisberger drop a 35-yard (in-air) touchdown completion to Diontae Johnson (50 yards total) on the first drive of the game dropped jaws. The underperforming Steelers offensive line would also shutdown Von Miller, who entered the game with 4.5 sacks and 7 QB hits, as the edge rusher was limited statistically to only two assisted tackles and nothing else.

The Steelers defense, largely neutered through the first four games because of a variety of injuries, started blitzing like crazy against the Broncos.

One play in particular (pictured above) saw Devin Bush absolutely cream Denver QB Teddy Bridgewater on a blitz. Bush’s speed put Teddy on a backpedal, which was an even worse situation as he got dropped for a loss of 12 yards.

With that drive stopped cold, the Steelers offense would takeover again as their ground game got to work.

Najee Harris would carry the ball 23 carries against a Broncos defense who were giving up an average of 60 rushing yards per game. This was another reason no one was giving Pittsburgh a fighting chance in pregame talks, as the Baltimore Ravens (the league’s best run team) barely topped 100 (102) one week earlier.

That didn’t detract from the Steelers game plan, as Harris averaged 5.8 yards-per-carry for 122 yards total: his first 100-yard rushing performance as a pro. Harris would also add a rushing touchdown and 20 receiving yards to his all-purpose total of 142.

The run would put the Steelers up 17-6 at half, but a slow third quarter by both teams would finally close with a Big Ben 18-yard touchdown pass to Chase Claypool, who caught five passes (on six targets) for 130 yards and one touchdown. He also had a catch and run of 59 yards that got the offense into the red zone.

The Broncos made a go of it in the fourth quarter, as Bridgewater led two different 70+ yard drives which ended in touchdowns. The second of those drives struck in under two minutes when he connected with WR Courtland Sutton, who beat Steelers backup CB James Pierre for a 39-yard touchdown pass.

This would get Denver within five points before a Chris Boswell field goal forced their hand late in the game, as the kicker’s 43-yard conversion put the Steelers up by eight. Bridgewater still gave everyone some heart palpitations, as the Broncos offense took over with two-and-a-half minutes remaining in the game, driving 72 yards and knocking on the door of their endzone in an attempt to tie the game.

Bridgewater would get his team down to the Steelers 3, as the clock ticked down to 17 seconds remaining and a do-or-die fourth down situation. Pierre, who had been playing in place of the injured Cameron Sutton, and who was beaten for the previous touchdown, had other plans.

Bridgewater stepped back to pass and looked for his Sutton again, but found the Steelers Sutton replacement instead. Pierre wasn’t fooled by the receiver’s route, turning and sealing a Steelers victory with a key interception.

Pittsburgh would improve to 2-3 on the year with the 27-19 win and a probable chance of turning their season around one week later in a primetime Sunday Night Football content against the Seattle Seahawks, before entering their own bye week.

Stay tuned next week as we continue to look back at last season’s ups and downs in the 2021 Steelers Season Recall series.