One of the best parts of being involved with putting the posts in this series together is being able to relive, in small ways, historical moments of the Pittsburgh Steelers franchise. It’s always fun to hear from young fans of different generations that they learned something new about their favorite NFL team. This week, we’re traveling back to 1968-69 and the man who sits first on the Steelers’ “Team MVP” recipient list: Roy “Sweet Pea” Jefferson. 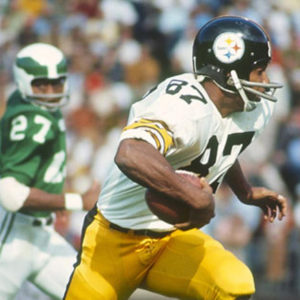 A kid who came up out of Compton, Jefferson grew up in the Los Angeles (California) metropolitan area before becoming a phenom for the University of Utah “Utes” in Salt Lake City (Utah). While playing on both sides of the ball, Jefferson also stood in as placekicker and earned Western Athletic Conference Player of the Year honors in 1964.

In 1965, Jefferson was selected in the second round of the pro football drafts by the Steelers (NFL) and the San Diego Chargers in a fledgling American Football League. Although the Chargers offered a considerable financial deal, Jefferson chose to play in the already-established National Football League.

Jefferson once admitted the financial decision was likely “the dumbest” thing he could have done for his future. The Rooney Family reportedly offered $15,000 compared to the $150,000 the Chargers offered.

He was daring and bold, often improvising on routes to earn longer yardage. This, among other personality clashes, caused conflict between the receiver and new head coach Chuck Noll, which boiled over to the point that Jefferson earned his first Super Bowl ring with the Baltimore Colts instead of Pittsburgh.

“I was young, high-strung and not intimidated… Chuck [Noll] thought I was usurping his authority and I didn’t want to play for him. He traded me.”

Jefferson led the NFL in receiving yards in 1968 (1,074). His 11 touchdowns on 58 receptions were second-most in the league that same season.

He was also named as the Pittsburgh Steelers Team MVP in 1969; the first player on the illustrious list of Steelers who are voted to the honor by their teammates annually. He’s joined by some of the greatest Steelers in history since that season.

After one season with the Colts, Jefferson gave his final years in the NFL to the Washington Redskins. He finished his career with 451 receptions for 7,539 yards and 52 touchdowns (receiving).

Jefferson was later named to the Pittsburgh Steelers Legend Team.