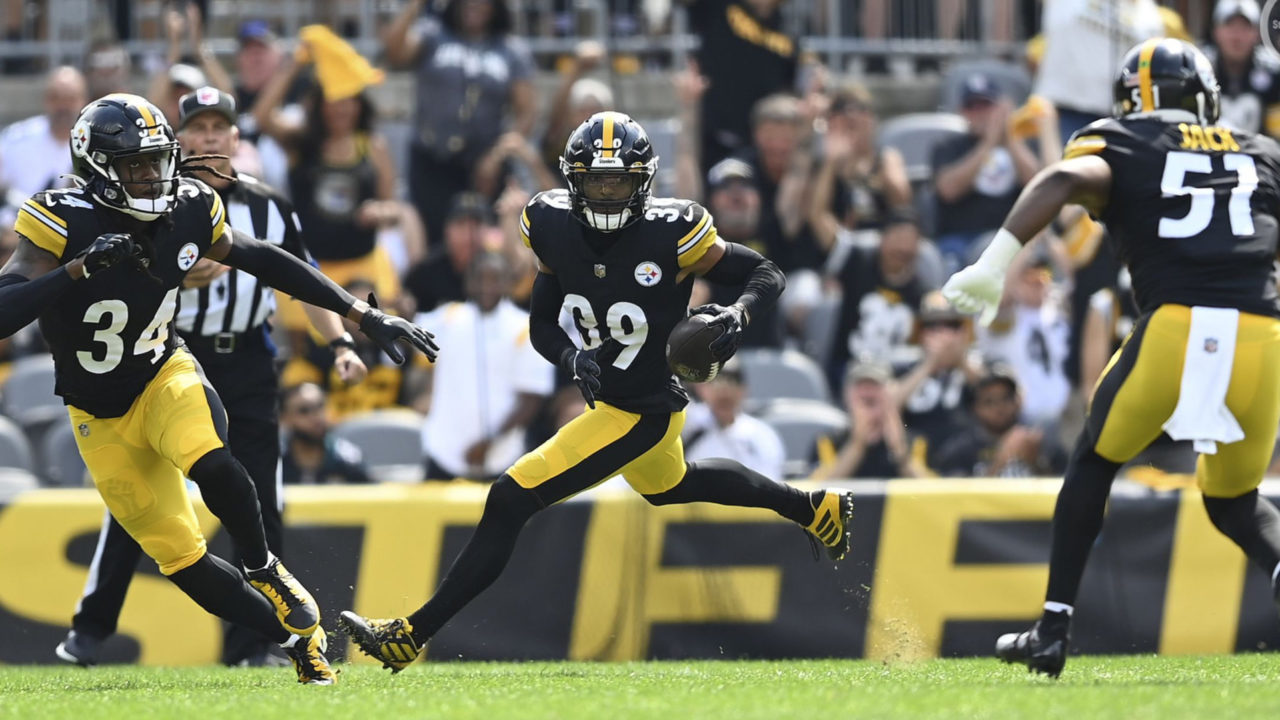 7 Steelers surprises in Sunday’s loss to the Patriots

On Sunday, the Pittsburgh Steelers hosted the New England Patriots for their Week 2 home opener at the newly named Acrisure Stadium.

The Steelers fell short to the Patriots by a final score of 17-14. Here are some of the surprises from that game.

Sack Masters of None

The Steelers were unable to create much pressure on Mac Jones Sunday, following their sack fest of Joe Burrow (7 times) one week earlier at Cincinnati.

The major difference, again, was missing reigning Defensive Player of the Year T.J. Watt, who was placed on Injured Reserve earlier in the week.

The Steelers have led or tied the NFL in sacks in each of the last five seasons. However, their league record 75 games with at least one sack was snapped, ironically, last season… by the Bengals.

Minkah Fitzpatrick came away with another interception this week, for consecutive games in which the Steelers safety has picked off the competition.

The Steelers successor to Ben Roethlisberger, Mitchell Trubisky, was below the line on Sunday, particularly in the first half.

In the second half, Trubisky led a touchdown drive, but also stalled late, going 2-for-4 for 5 yards in the last two Steelers offensive series: they would go three-and-out in both to seal their fate.

Among those calls included Najee Harris gaining four yards on a 3rd-and-1 and Derek Watt – a fullback! – receiving a handoff to convert another short yardage situation.

53% may not seem so promising, especially with an anemic offense, however it helped keep the defense a bit more fresh, especially compared with last week’s 17-minute time of possession differential.

Despite the offensive woes, perhaps this provides some hope over last year’s lack of third down proficiency, which saw the Steelers only convert more than 50% of their third down situations in three of their seventeen games. (Broncos, Chargers, and the second Bengals game, two of which were shootout/blowout contests.)

Disappointment is more of a proper term than surprise.

A 2020 First-Team All-Pro as a return specialist, no one would’ve imagined Gunner Olszewski muffing a punt. He has been nothing but sure-handed throughout the offseason, but this critical turnover was shocking – and gave New England a short field in which they took advantage of scoring a touchdown off of.

Not So Offensive O-Line

Pay no mind to the naysayers out there who are clinging to the preseason narrative that the Steelers offensive line is bad. It’s honestly not even poor, in most cases, as Mitchell Trubisky even claimed ownership of two of the three sacks he took on Sunday. (By moving up in the pocket and into pressure.)

The Steelers line has been especially strong in pass protection, giving Trubisky time to attempt to make his reads.

RG James Daniels is only one of five offensive lineman in the league to not give up a single pressure this season – that’s telling, as the Steelers have played an additional quarter of football as well, with the overtime period in Cincy.

As for the run game, several film analysts (and even former players) have pointed out that the line is doing its job, but perhaps Najee Harris isn’t seeing the field properly.

I had to watch it again to make sure I wasn’t trippin. This was the first play of the game. It is blocked almost to perfection! Look at that interior push! There is no read here that tells Najee to bounce it. He predetermined this. Man this angers me so much… pic.twitter.com/2RymZ7nLRD

Idk, man. I know the nose is peeking but I think I'm cutting this joint back inside. There's no one in that gap. pic.twitter.com/7KN0bHUGWd

In Najee’s defense he has been dealing with a foot injury since the preseason and may not be in top form. Unfortunately, that’s not good news for the Steelers offense…

Did we mention the offense is bad?

Let the stats speak for itself!

In addition, the Steelers offensive drives are as follows through two games, nine quarters of football:

They have settled for five field goals while punting exactly half (12 times) of their total possessions.

It has to get better…