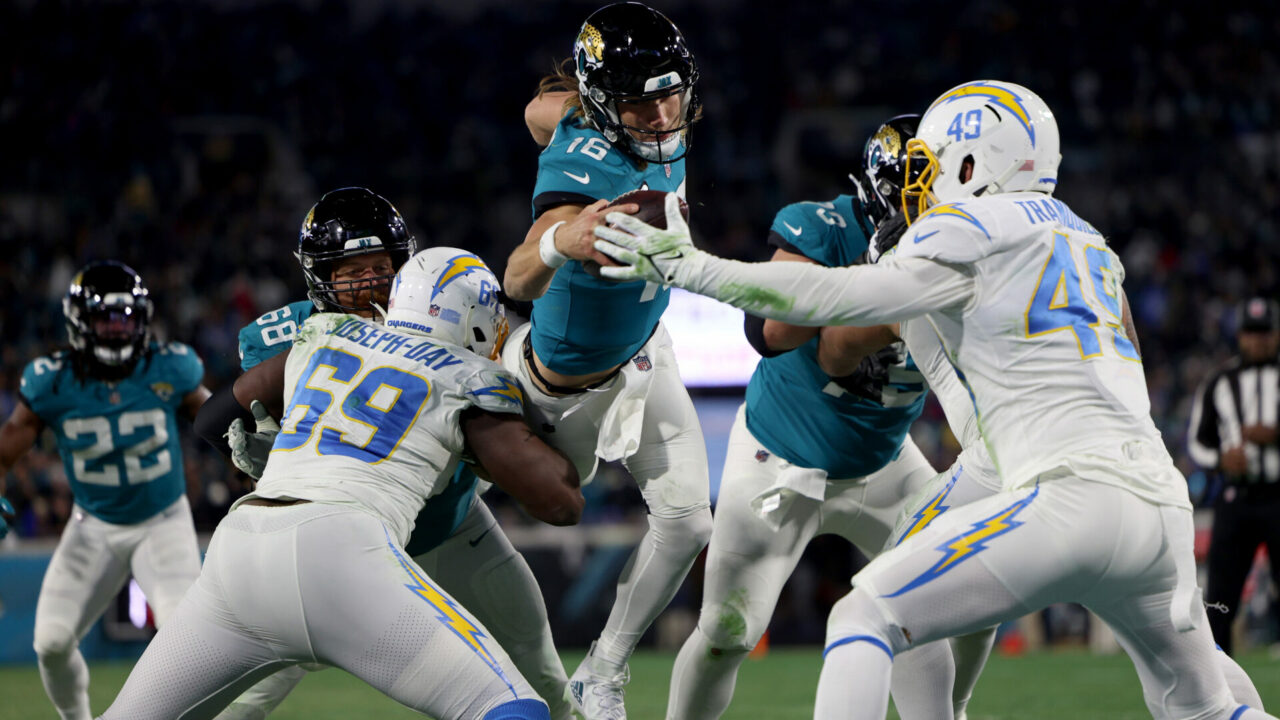 Each week our SCU staff and contributors picks the “surprises” from the latest NFL matchups. Check out more below to see which plays and situations surprised us the most!

Okay, I know there’s still one more game on deck for this “weekend”, but it felt natural to continue with my weekly column just for the sake of what transpired on Saturday and Sunday during the NFL Super Wildcard Weekend. Here’s what I thought stood out from each of the five games played thus far.

And to be honest… some of these weren’t surprises!

I thought this would be a closer rematch of two division rivals, but the Seahawks were overmatched defensively, giving up 181 yards on the ground (119 of those to Christian McCaffrey, who averaged 7.9 yards-per-carry) as well as 332 yards and three touchdowns to third-string quarterback Brock Purdy.

The Niners scored on all but one of their first nine possessions – with another tenth being their handful of plays to run the clock out with a 41-23 victory.

Jaguars comes from behind to win

I honestly felt like this was going to be more of a game, then like many others, started to tune it out as background noise when the Jaguars fell behind 27-0 with 4:28 remaining in the second quarter.

Jacksonville’s early collapse was due to four first half interceptions by second-year quarterback Trevor Lawrence – who would turn around and follow that up with four touchdown passes, as the Jaguars somehow managed to come from behind and win, off of a 36-yard field goal as time expired.

The surprises didn’t end here however!

Another third-string quarterback? Against the second seed, on the road? Gimme a break!

Well, this was another early lead that diminished, as the Bills saw their 17-0 advantage dwindle to a tie game with 37 seconds before halftime. Kicker Tyler Bass would give them a three-point lead heading into the lockers.

The Dolphins received the ball to start the second half and went three-and-out, but they’d get the ball right back after strip-sacking Bills QB Josh Allen, which resulted in a defensive touchdown that gave Miami a 24-20 lead.

Buffalo stepped on the gas, scoring two more touchdowns however, as QB Skylar Thompson finished the day with two picks, as Miami fell 34-31.

On the Steel City Underground Podcast, I strongly felt this was the game that was hardest to predict. I didn’t think the Vikings were the team that their record indicated, but I still took them to win at home based on how they found ways to win close games – usually because of Justin Jefferson.

Oddly enough, it was Jefferson that Vikings QB Kirk Cousins failed to locate for most of the game (7 catches, 47 yards) as the Giants went into Minneapolis and stole a road win, 31-24.

Daniel Jones, of all people, led the charge with 301 yards passing, two touchdown passes and another 78 yards rushing – which led both teams! (Sorry Dalvin Cook and Saquon Barkley!)

Remember that whole “Mike Tomlin’s playoff wins” thing that circulated around? Wait, how can anyone forget?! People are still complaining about his lack of postseason victories, but I wonder if the city of Baltimore has a similar feeling?

The Ravens kept this game close to the vest, despite playing without QB Lamar Jackson. Tyler Huntley, his backup, would actually throw for more yards and touchdown passes than his lauded Bengals counterpart, Joe Burrow, in this game.

However, it was Huntley’s snafu on a goal line stretch that led to a scoop-and-score touchdown run of 98 yards by Cincinnati’s Sam Hubbard – a major swing in the game that went all the way to the wire. At the time the teams were tied 17-all and this led to the final score of the game, as the Bengals went on to win 24-17.

See fans, its not exclusively a Pittsburgh thing!