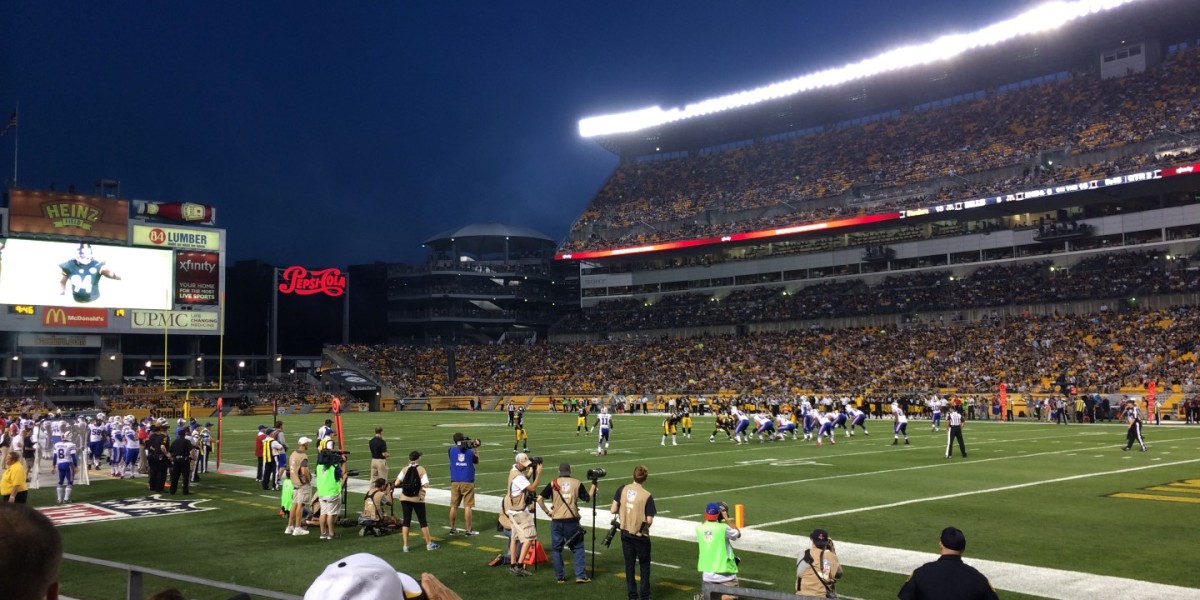 We’re halfway through the preseason, with kickoff weekend looming weeks away. The 2014 Steelers are starting to take shape: here’s what we liked (and disliked) in the second preseason game against the Buffalo Bills.

Like: First and foremost, the dreaded injury bug is staying away, hopefully for good. Considering some of the substantial contributors other teams have lost, combined with the history of bad luck Pittsburgh has had the last few seasons, we’re counting our lucky stars that karma is finally on our side.

Now, starting from our wish list for the second preseason game…

We’re in love: Well, there went any thought of a competition between Shazier, and the linebackers behind him on the depth chart. We had thought there could be a contest between Sean Spence and possibly Vince Williams, with both players having a good camp and a nice outing during the first preseason game… but first round draft choice Ryan Shazier obliterated any thought of that! With an 11 solo tackle performance (2 on special teams) a tipped pass and an interception, Shazier shattered expectations.

The Heinz Field faithful waited patiently to see what #50 was capable of, and burst into applause several times, as the linebacker’s name was called over and over. If this is any indication on how Shazier will perform in the regular season, the defense is definitely on the upswing.

Like: Seperation, route running, hauled in the pass, both feet in, touchdown. Need we say more?

Plays like this will make everyone forget about Manny Sanders quickly. (Though we’ d like to see a little better blocking from you Markus.)

Like: With Jarvis Jones out nursing an injury, Worilds made his presence felt, albeit robbed of a sack due to intentional grounding by EJ Manuel. (Don’t worry Jason, we’ll give you credit where it’s due.)

Like: Archer once again dazzled us with a speedy splash play, showing us more of what he’s capable of doing when he gets in open space.

Like: Despite facing two of the NFL’s premier backs in CJ Spiller and Fred Jackson, the Steelers corrected last week’s mistakes and did not give up a big run.

Strongly Dislike: I hate to use the word hate, so I’ll say I strong dislike the backup QB play from Saturday’s game. The performances of Bruce Gradkowski and Landry Jones flip-flopped from the previous week, as Jones took the 2nd team snaps, with Gradkowski closing out the game.

I really want to give both players the benefit of the doubt, as they’re playing with backups, rookies and camp bodies; much of which makes preseason games a disaster. Unfortunately Jones could not look an less like an NFL capable QB. Jones folded under pressure constantly, and could not find any rhythm. A collapsed pocket forced him to move toward the line, before making a baffling movement which resulted into a turnover.

Furthermore, Jones’ erratic play gave us little to see from the other receivers in camp such as Justin Brown, Darrius Heyward-Bey and Derek Moye, as the QB was unable to deliver them the ball.

Gradkowski appeared a bit more comfortable than a week earlier, as his throws were more accurate overall. His lone interception came at the expense of a tipped ball from Martavis Bryant, who previously came down with an air ball plays earlier.

I’ll give Bruce a pass for playing with many receivers who will not make the 53-man roster. He still hit 7 of 13 passes, and was able to move the ball moderately.

However, the QB play leaves much to be desired over the last two weeks and should be a major concern, as the Steelers have been bit in the behind before when Big Ben has fallen to an injury. Neither Gradkowski or Jones appear to be in the vein of a Byron Leftwich or Charlie Batch, both previous backups with the team that were able to answer the call when needed.

Like: Brad Wing improved from last weeks 36.5 average to 44.5 this week, kicking 6 times in both contest. His long was a 53 punt that could’ve gone further had the ball taken a Steelers bounce. His kicks still tend to hang in the air rather than gain distance, but there were no poor punts this week, despite working with a new long snapper…

Which could be the reason why Shaun Suisham missed his first extra point attempt of the preseason. Also working with a new holder (Wing) and kicking from roughly 33 yards out; part of an NFL experiment with extra points this preseason.) We dislike the miss from “Mr. Automatic” Suisham, but understand all of the moving parts involved, and the short amount of time these players had to practice.

My final “like” of the preseason game, came from the ball hawk known as Howard Jones. No sooner I mentioned that Jones was quiet, Vic So’oto committed a sack/fumble on Bills QB Jeff Tuel. With the ball tumbling in the open field, it was scooped up by none other than Howard Jones, who nearly rumbled into the end zone with the loose ball. Jones had previously forced two fumbles the week before, returning one for six points. His play setup the Steelers’ game-winning field goal as time expired.

Last week I said losses in the preseason do not matter. However, a loss this week, especially after giving up a lead, and having an opportunity to drive with a minute left on the clock squandered by a turnover, would’ve been morally devastating for a team looking to change the stigma left by two 8-8 seasons.

A win here keeps the club riding high. The first team offense looked crisp and potentially more explosive than seasons passed. The defense continues to show flashes of returning to the “Blitzburgh” of old, but there are still kinks to workout, such as unnecessary penalties and allowing third down conversions.

Check back with us later this week as we preview Thursday’s matchup with the Philadelphia Eagles and rundown our new wish list for this game.