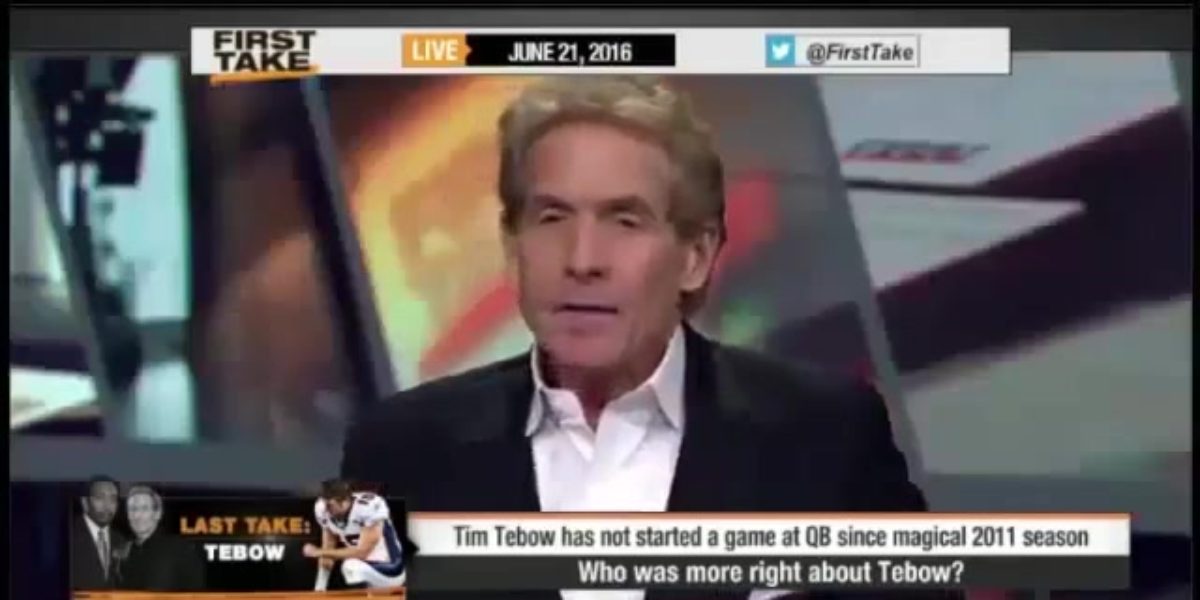 It’s not often I write articles like this, but ESPN has me going 2-for-2 this past week, when it comes to taking jabs at the Pittsburgh Steelers.

First it was a misguided preseason ranking of the NFL’s best triplets which put me on my soapbox (including a podcast) and now it’s the infamous Skip Bayless, taking liberties with the Pittsburgh faithful upon his exit from the network. Bayless is leaving his hot-take “First Take” show on ESPN to join Fox Sports 1 for a deal worth an estimated $5-6 million per year.

During his farewell episode, Bayless, who is no stranger to making sensational comments, decided to give a low-blow to the Pittsburgh Steelers, and their fans, by making another boneheaded comment on his final appearance of First Take. The shots were purposely fired at Bayless’ co-host Stephen A. Smith, a lifelong Steelers fan, bringing up a memory that still pains fans to this day: Tim Tebow.

The special farewell episode of First Take examined many of Bayless’ predictions over the years, with this segment discussing who was right about Tebow’s career. During the segment, Bayless proclaimed it was the “the highlight of my career.”

Like most Steelers fans, that loss might be one of the worst ever, at least recently. Pittsburgh was coming off a Super Bowl appearance the previous season, and were poised at another run for the Lombardi Trophy after finishing the regular season with a 12-4 record. However, even with 12 wins, the Steelers finished 2nd in the AFC North, receiving a Wild Card berth trip to Denver, where they became victims of the NFL’s new overtime rule: both teams could now possess the ball once each, unless one of them score a touchdown first (which would result in a sudden death victory.)

That’s when the planets aligned on an already crazy season for the Broncos, who turned their season around overnight with the often criticized Tim Tebow. Tebow, a polarizing figure for his religious beliefs and infectious positive attitude, became a trending pop culture figure. His touchdown celebration consisted of genuflecting in prayer; dubbed “Tebowing” by the mass media, and imitated by millions across the world during a short span of time.

The Broncos and Steelers would force the first overtime playoff game under the NFL’s new rules, where Tebow, not known as an elite passer, would throw an 80 yard game winning touchdown on the very first play of the extra quarter. While that play will forever go down as one of the NFL’s most memorable, it doesn’t sit well with Steelers fans, who saw the potential chance at another Super Bowl ring slip away within seconds.

The Steelers would go on to replace their offensive coordinator, and make changes to an aging defense following that 2011 season. For several seasons, Pittsburgh would miss the postseason, with the Tebow play being their last appearance, and most recent memory for fans to live through, with year-after-year, and game-after-game, of video replays.

Stephen A. Smith offered the yin to Bayless’ yang, siding with the rest of Steelers Nation in saying it was his “lowest point” of his career:

“The lowest point of my on-air career was Monday, January 9 of 2012, the day after Tim Tebow threw for 316 yards and the Denver Broncos beat the Pittsburgh Steelers in that game,” Smith said. “I gotta be really, really sick to call off work, but that day, I was so depressed, so sick at the thought of sitting across from Skip, I was looking for every excuse in the book not to show up on the air that day because I was so disgusted.”

Fortunately, we won’t have to hear Bayless’ remarks on ESPN any longer.