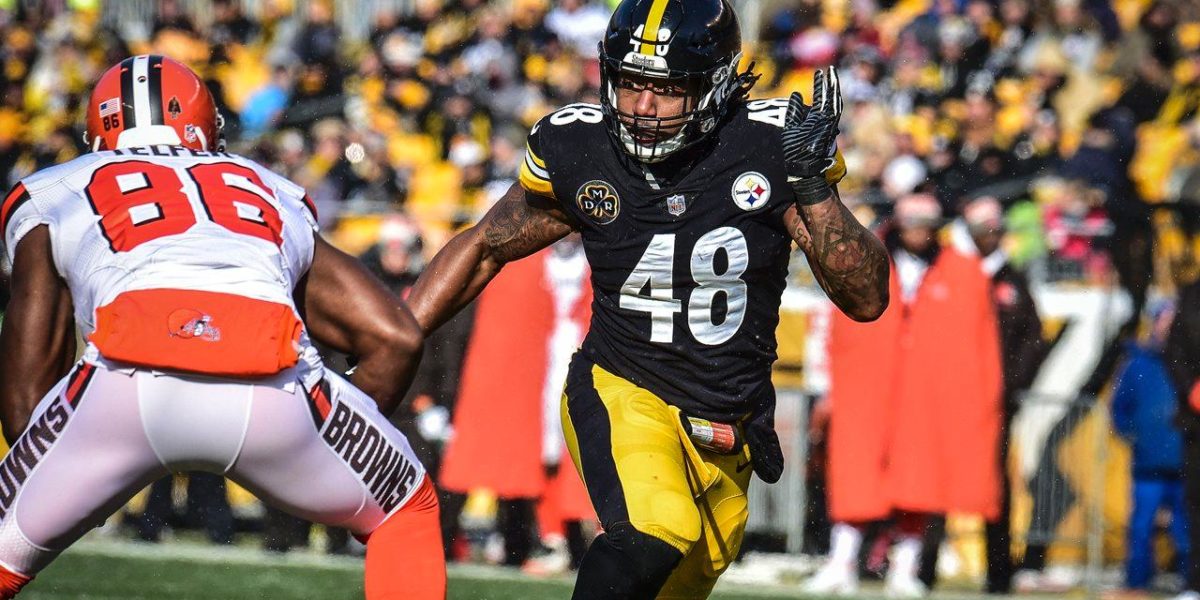 Recent rumbling about whether the Pittsburgh Steelers should pick up starting linebacker Bud Dupree‘s has run the gamut of “he has potential” to “he’s a bust”.

Regardless of your feelings about Dupree, there are a number of compelling reasons why the Steelers should hang onto his rights for one more season. All NFL teams must make a decision soon on whether or not to option their 2015 first round draft picks. Those rookies are under a four-year contract and in most cases are signed through 2018. Thus, the fifth-year option is much like a franchise tag, in that it allows teams to retain their top picks, at a higher cost than the rookie contract they signed initially but possibly lower than market value, for one additional season.

Here are four reasons why I feel the Steelers would be wise to make such a move.

Unless the Steelers make a splash in free agency or the draft, their outside linebacker stash is bare. Besides Dupree, the only other experienced player currently under contract is T.J. Watt. Anthony Chickillo is a restricted free agent this offseason and is expected to return. Outside of those players, 2017 seventh-round pick Keion Adams and practice squad hopeful Farrington Huguenin are the only other edge defenders on the depth chart.

Adams didn’t see the field beyond training camp after being placed on the injured reserve list for 2017. Huguenin accumulated 11 total tackles and two sacks during exhibition games last preseason.

The team could possibly plan ahead to replace Dupree, should the two not come to terms on a new contract to extend him beyond 2018. However, those plans may be difficult to fulfill.

Some may say that Pittsburgh could draft an edge rusher in this year’s NFL Draft. That will likely happen, but the quality of talent and the round the Steelers would need to select that player, make Dupree’s likely replacement otherwise unlikely.

First off, this year’s edge class is not very deep. Beyond the top players, there’s a sharp drop off. That means, if you believe Dupree isn’t very good, the grass may not be green at all on the other side of the equation with a 2018 pick as a replacement.

The second variable that muddies the water is that Pittsburgh has other draft needs, such as safety and inside linebacker. Should Ryan Shazier not be in the team’s future plans, they would be wise to address the inside linebacker spot before the outside one. Their safety depth also isn’t fantastic either, so other needs may bump grabbing a top prospect early.

Also, consider that critics of Bud Dupree believe he was a waste of a first-round pick: if you’re honest about that, then you can’t believe another first round pick is an immediate fix. In fact, they could be worse.

Taking a look ahead, there are other needs beyond 2018, where holding onto Dupree would be one less issue to address for the 2019 iteration of the Steelers. As mentioned, Shazier’s future is all but a certain one. Some other players, such as Vince Williams, are currently entering the final year of their deals and will become free agents in 2019.

When you start to look at an offense that may be without Martavis Bryant and Le’Veon Bell in 2019, the decision makers may pull the trigger on future insurance policies for those positions on the roster as well.

Rather than weaken yet another position, the status quo of keeping Dupree doesn’t seem like a bad alternative at this time.

He’s not a bust

I wrote extensively in a previous article on why critics of Dupree should not compare him to Jarvis Jones. Among those chief reasons is the amount of time Dupree has been in the league, as well as the number of snaps he’s taken thus far. He missed a good portion of his 2016 season due to injury, appearing in only seven regular season games. His return was gradual too, as he played a single snap against the Browns, and a third of a game against the Colts before jumping back into a full-time role.

In his rookie season, Dupree was part of a linebacker rotation in which he shared roughly half of the defensive snaps with other players. He also wasn’t rushed into a starting role like Jones, with only five starts as a rookie and another four the subsequent season. 2017 would be the first that Dupree played a full-time role.

Some feel he didn’t prove enough as a pass rusher, yet he ended up with six sacks: only one less than his counterpart on the other side of the defense, T.J. Watt (who had seven). Watt’s 39 tackles edged Dupree’s 31, but each of these “edge defenders” was in the top five of their position to drop back into pass coverage last season. According to Pro Football Focus (PFF), Dupree dropped into coverage the fifth-most amount of snaps of any edge defender (3-4 outside linebackers or defensive ends in a 4-3) in the league. The fifth-most coverage snaps, 137 of his 850 snaps, are further skewed when you consider he played the 19th most total snaps among those edge players.

Of the edge defenders who played at least 400 snaps in 2017 and dropped into coverage more than Dupree, only two had more sacks than him: his aforementioned teammate T.J. Watt (7.0) and Baltimore’s Matthew Judon (8.0). Those expecting Dupree to have output like Chandler Jones (17 sacks) or Calais Campbell (14.5) should lower their expectations: of the top ten sack leaders in the edge defender category, only one dropped into coverage more than 5% of the time (Ryan Kerrigan, 5.98%, 13 sacks).

In other words, Dupree has had less opportunity both in the number of total snaps he plays on the field, as well as the number of times he actually rushes the passer, yet still finished in the top ten of (10th to be exact) of those edge defenders (who played at least 400 snaps this season).

Unfortunately, the Steelers cannot wait and see what 2018 holds for Bud Dupree before making a decision. NFL teams have until May 3rd to activate the fifth-year option. Next year’s decision must be made this year.

However, the positive side of this, unlike a franchise tag, fifth-year options are only guaranteed for injury. Therefore, if the Steelers were to use the option on Dupree, and not like what they see in 2018, they could easily cut ties with no financial harm caused to their cap situation for seasons to come.