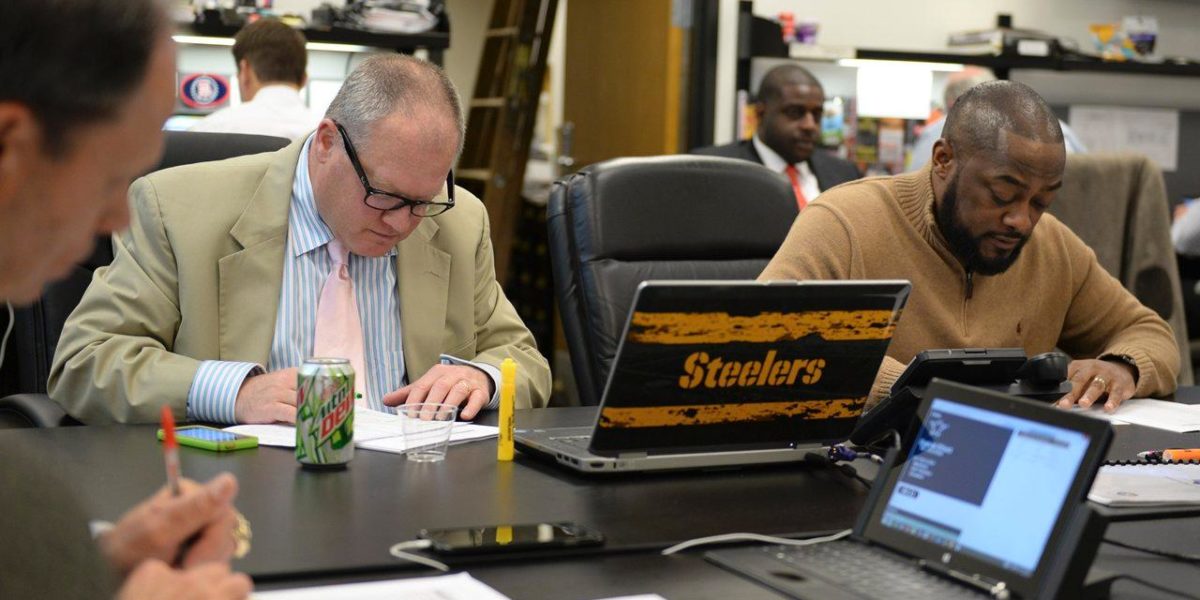 Going into the NFL Draft there is always an unlimited number of outcomes that could occur. Players fall, teams reach, you never know who will be the next player taken.

It’s near-impossible to accurately predict how the 2019 draft will play out for the Steelers. You may get a draft where their main targets fall right into their laps (like T.J. Watt in 2017), or the guy they want may get taken one pick before them, like William Jackson III in 2016.

I looked ahead at some of the best case scenarios for the Steelers, along with some of the worst.

Best-case scenario: Devin Bush falls in the 1st round

I’m going to start out with the most obvious best-case scenario: Devin Bush falling in the 1st round. Like past picks such as David DeCastro and T.J. Watt, this would be an absolute no brainer selection that fills an obvious need.

I’m not even asking for Bush to fall to pick 20 honestly, even though I wouldn’t complain if he did. If Bush gets past the Broncos and Bengals, the two teams Bush is most commonly mocked too, then the Steelers would be in a prime position to trade up. A team like the Miami Dolphins who are low-key tanking in 2019 (#FishTank) would be the ideal team to trade with. Most likely a 3rd round pick would do it and the Steelers would get a day one starter.

While the Steelers have other linebacker options in the draft like Blake Cashman, Bobby Okereke, and David Long, none would have an immediate impact of the defense like Bush.

Worst-case scenario: A run on cornerbacks in the 2nd round

Depending on how the first round goes (Greedy Williams?), the Steelers could be looking to draft a cornerback in round 2. With Joe Haden turning 30 and in the final year of his deal, Artie Burns, not even a lock to make the roster, and Stephen Nelson not necessarily a sure thing despite his contract, cornerback is definitely on the table for this draft.

If the Steelers pass on a cornerback in round 1, they’d likely be hoping a guy like Rock Ya-Sin, Amani Oruwariye, Sean Bunting, Julian Love, or Justin Layne fall. Given the recent trends in cornerback runs, (2015 comes to mind as well) the odds of somebody falling seem slim. And if there’s a run, that could lead the Steelers to reach on a cornerback… again…

(Of course, if the Steelers draft a cornerback in the 1st round then a run in the 2nd would be a good thing)

The Steelers picked up Bud Dupree‘s 5th-year option for 2019 and re-signed Anthony Chickillo. None of these moves are particularly inspiring in my opinion and while both edge rushers are fine in their roles, the Steelers should be looking to add some depth to the position in this year’s draft.

A best-case scenario would be Chase Winovich falling in the second round to pick 52. He would be the perfect player to be a depth piece this season to then take over as a starter in 2020. With the Steelers showing a clear interest in him, he will surely be on their radar. While he’s a candidate to be a surprise 1st round pick, landing him in round 2 is ideal.

A consolation prize if the Steelers can’t land Winovich would be Ben Banogu. Because he’s a more unrefined edge rusher who needs coaching and polish before starting, his stock is all over the place. While he could be a second-round pick, drafting him in the third is also feasible and may be of better value. Banogu would be a great pick however because he has all the athleticism and versatility the Steelers want in their edge rushers, he just needs time to develop.

This entire article thus far has unintentionally focused on defense and that fact drives home this point: the Steelers defense is in need of playmakers. The Steelers secondary doesn’t have a ballhawk currently and is more prone to drop an interception than actually get one. The linebackers don’t have a guy who can fly around and make plays, something lacking ever since Ryan Shazier‘s injury. Playmakers – they need them.

A worst-case scenario for the entire draft would be if the Steelers don’t draft anybody who can contribute right away and be a playmaker. Even if whichever defensive back or linebacker they select only plays in sub packages, getting a splash player is a necessity. The Steelers staff has discussed their lack of defensive turnovers this offseason so ideally, this is a priority going into the draft.

Best-case scenario: Steelers are aggressive and willing to trade up

The Steelers are entering the draft with 10 total draft picks, including 2 in the third round and 3 in the sixth. Given that the Steelers roster is actually in pretty decent shape, the best move for the Steelers would be to use their abundance of picks to trade up in the draft. We’ve seen in done before, as recently as last year the Steelers traded up to draft Mason Rudolph. We’ve also seen them exchange players for picks, getting guys like Ryan Switzer and Vance McDonald in recent years.

I mentioned previously how the Steelers could be in a position to trade up for guys like Devin Bush or Chase Winovich. Whether it’s these guys, Darnell Savage, or one of the wide receivers who will inevitably fall in this crowded class, the Steelers should be entering the draft with an aggressive mentality. The team normally doesn’t enter the draft with this much ammo so it would be wise of them to take advantage of it.