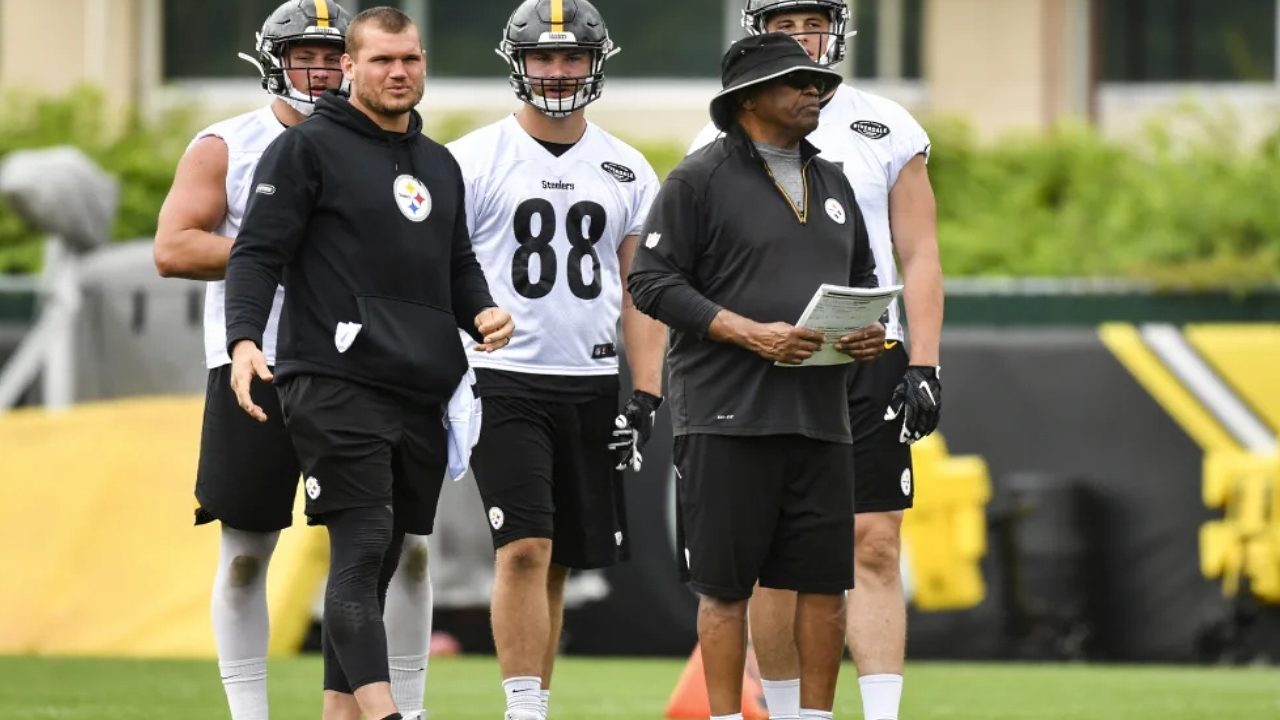 What to watch for at Steelers training camp: Tight End position

PTraining camp is right around the corner, and the Pittsburgh Steelers will carry 91 men into camp this year. How do you know who to watch? What position battles are key? Who are we looking to keep an eye on? Over the next couple of weeks, we will break down some of the most hotly-contested position battles for you to know where to focus. These articles will contain no predictions and no sort of outcome, just a simple what to look for. Consider this your guide to camp. Let’s have some fun!

This week we look at the tight end group, which has experienced a little bit of turnover this season. Jesse James headed to Detroit, taking his 30 receptions, 423 yard and two touchdowns with him during free agency. Not exactly record-breaking numbers, however, his position as the second tight end in 12-personnel is what is most important to look at. He was a chess piece that could stay in line and block with exceptional size, or break off and catch a pass. As of right now, there’s a couple of talented players looking to fill his shoes, although that doesn’t rule out bringing in a veteran tight end. As of today, let’s take a look at the current position for the Pittsburgh Steelers.

The returning starter, Vance McDonald, is on the verge of becoming a top player at his position in the league. He really broke out last season with 50 receptions for 610 yards and 4 touchdowns. Most will remember his stiff arm on Chris Conte in the Tampa Bay Buccaneers game, but he was so much more than that.

With Antonio Brown gone, the Steelers are going to look to multiple players to replace his 15 touchdowns from last season, and McDonald may very well be the biggest benefactor. So, with all that, what do we want to see from him at Latrobe? Simply, whether or not he can stay healthy. Soft tissue injuries have kept him from ever playing a full 16 games in a season during his career, so let’s keep an eye on how much time he misses at camp. Assuming he remains healthy, he should have a career year in 2019.

Next, we look at the veteran reserve on the roster, Xavier Grimble. Grimble has great size and is a stable blocking tight end, but has just 22 receptions over the last three seasons. He has shown flashes of pass-catching potential but hasn’t put it together completely, keeping him off the field and behind James in the pasts. Most notably, Grimble’s fumble against the Denver Broncos in the end zone put him in Mike Tomlin’s doghouse and off the field. In camp, we are looking to see if he can hold off rookie Zach Gentry for the top reserve spot. Can Grimble develop a good rapport with Roethlisberger? Mostly, can he be consistent and put it all together this camp? If not, Gentry comes in as a Jesse James-type player ready to take over and Grimble will be relegated to coming in for extra blocking help once again.

Gentry is a big man. Standing 6’8″ and weighing in at 265 pounds, he still managed to run a sub-five second 40-yard dash. He comes to the Steelers with plenty of experience, having started 24 games for the Michigan Wolverines. He was a seam-buster that did excellent work when up against safeties and linebackers. Naturally, his size allows him to effectively use his body to box out defenders and make a contested catch. So what are we looking at in camp? Toughness. Gentry has a history of lacking power at the point of attack, can sometimes get handled and thrown off balance; overall for a man of his size, he can be easy to bring down. It would be nice to see him develop a little bit of an edge, or a mean streak if you will, to help him become a more well-rounded player. He may not play a big role this season, but if he can display toughness, he has a future in this system.

Let’s not forget viral rugby star, Christian Scotland-Williamson, who joined the Steelers through the NFL’s International Player Pathway program in 2018. Oh, you haven’t seen the video? Here you go.

Another large man at the position at 6’9″, 265, Scotland-Williamson also has excellent athleticism. However, this is only his second year playing organized football, as he is a career rugby player. Scotland-Williamson told NFL UK, “Now that I’ve been through one year, I understand how to manage myself, what to expect… so now it’s about trying to refine my skills and really compete for a spot.”

The Steelers are allowed to carry 91 men into camp and 11 on the practice squad through the season but will not get a roster exemption for the English star in 2019 as was recently reported. In camp this season it’s just a matter of whether or not he has grown in the sport with a full year under his belt. Has he gained a further understanding of the position and his assignments? It’ll be exciting to see him get more reps as a tight end in camp. Only time will tell how far he will go in this league.

Lastly, there’s Kevin Rader, a guy that Maurkice Pouncey has raved about during OTAs and Minicamp. And when Pouncey talks, you listen. The Pine-Richmond alum possesses some receiving chops and mental fortitude to stick around. He began his college career as a defensive end before making the switch to tight end. His senior year at Youngstown State saw him haul in 41 receptions for 601 yards. He had a brief stint with the Green Bay Packers in 2018 that saw him log zero preseason statistics. At camp, we’ll be watching to see what kind of player Rader can be in the NFL. Can he impress enough to get snaps in camp ahead of Gentry or Scotland-Williamson? One thing is for sure. If the Steelers plan on keeping McDonald healthy, there is a real possibility we’ll see Rader running snaps behind Grimble at least once in camp.

Overall, the tight end position is young, filled with some intriguing, yet inconsistent options. The biggest things to keep your eye on in camp will be the pecking order, and who Roethlisberger trusts. If one of the players behind McDonald can gain that, they’re likely to pull ahead for second tight end duties. Playing time runs through the future Hall of Fame quarterback; don’t let him down.

Who are you most excited about watching at camp? Who do you think makes the roster? Let us know in the comment section.

One response to “What to watch for at Steelers training camp: Tight End position”