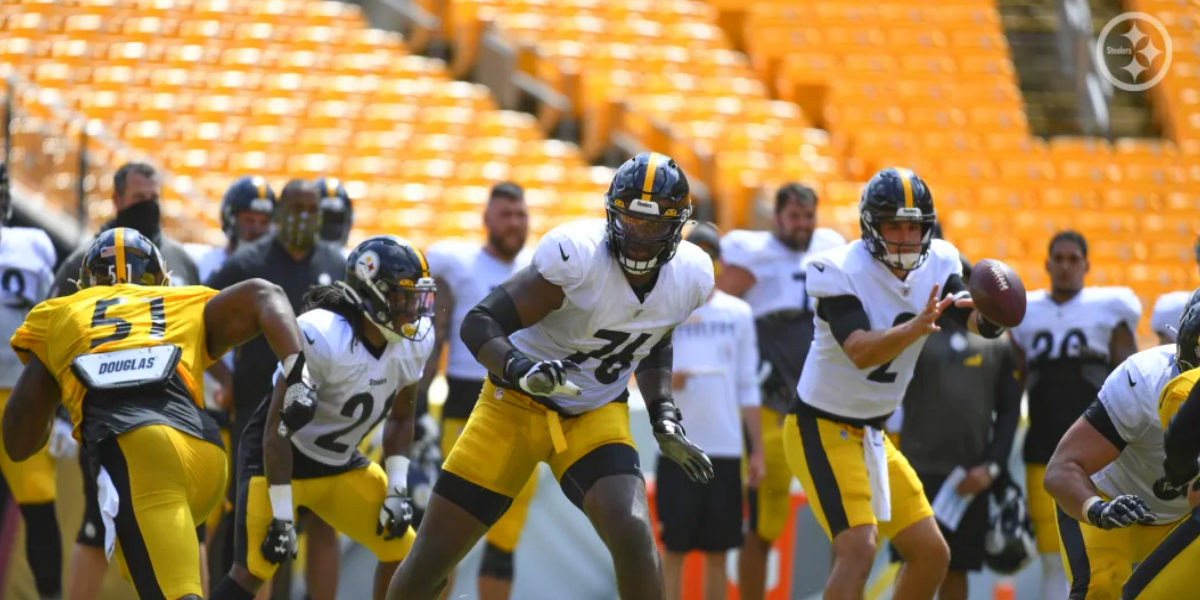 With all NFL teams, including the Pittsburgh Steelers, nearing the 4 p.m. Saturday, Sept. 5, deadline to reduce their rosters from the camp-specified 80 to the mandatory final 53-man roster, there’s not much of training camp left. The Steelers will open their 2020 NFL regular season on the road against the New York Giants at MetLife Stadium on Monday, Sept. 9. The Steelers’ offensive line faced adversity with the carousel at quarterback and injuries last season, so there has been an emphasis during the preseason/camp period to focus on improvement while also evaluating players who will be asked to step into vital roles this season.

There is little doubt that Maurkice Pouncey and David DeCastro, both awarded veterans, are presumptively the ‘starters’ at center and right guard. With Alejandro Villanueva and Matt Feiler as presumptive starting tackles, there has been rotation among other players in camp to see who might step into a starting role as “swing tackle” and left guard. Coach Mike Tomlin made it a point to address the fact that developing cohesion on the offensive side of the ball is often a step behind that of the defensive side, especially along the line. An offensive line is a unit in football that must be in lock-step if they are to be effective, unlike many of the other positional groups where there is a bit more leeway.

“It’s a known fact that offensive cohesion probably takes a little bit longer (to develop) than defensive cohesion. The timing and the ability to get a sense of that timing and work collectively is much more important.” – Mike Tomlin

The Steelers have seen some minor injuries that caused players to miss some time, including DeCastro and rookie Kevin Dotson. That allowed Pittsburgh’s staff to evaluate some of the other linemen in camp. “It’s good to see those guys coming together,” Tomlin said.

Dotson was able to return to practice last Friday for the team’s live scrimmage, his first practice since injuring his knee early in training camp, and on Monday showed tenacity in one-on-one line drills per Bob Labriola. “I have to make my impact fast. I need to do what I can right now,” Dotson admitted when asked his thoughts on the early injury. “When it first happened, I was truly scared.” Then Dotson started working on getting back and went hard in the live scrimmage. “I was glad to be put in that situation… I wanted to make my impact, get seen,” Dotson said. “I am not a person to sit out a long time.” That Dotson got time with the first-team offense was seen as a bonus by the young lineman, and he felt that was his “proving time”.

In a recent exclusive podcast interview with Steel City Underground’s Joe Kuzma, Zach Banner talked about what he has seen from the guys along the offensive line at camp.

We know upfront what we can do. We had some issues last year, but we did them as a front five or six. I’m excited to see what we can do as unit to move the ball and getting Ben some opportunities to get the ball to guys amazing guys like JuJu [Smith-Schuster], [Diontae Johnson], and James [Washington].

Banner also expressed that he feels he has a real shot in 2020 to become the starting right tackle but that regardless of where he lands on the team, he takes a Tomlin quote to heart: “Don’t seek comfort.”

With the addition of veteran Stefen Wisniewski during the offseason, the Steelers are looking for five players that can function as one body or unit. Coordination as a positional group is of utmost importance, which requires trust and an understanding of how each player will react on any give play or in situations that change in-game. The biggest expectation the coaching staff has presented over and over again throughout camp is that their players should show up ready to play, fully prepared, and ready for competition. The offensive line looks like it has accepted that challenge to be mature and gel in order to be a cohesive unit.

Note: Primarily, NFL teams utilize two starting offensive tackles and one primary backup known as the “swing tackle”. Gameday rosters are limited to 46 players in uniform. Seven offensive linemen are usually dressed; the starting five, a backup who can play any of the three interior positions, and one backup who can line up at either end of the line at tackle.