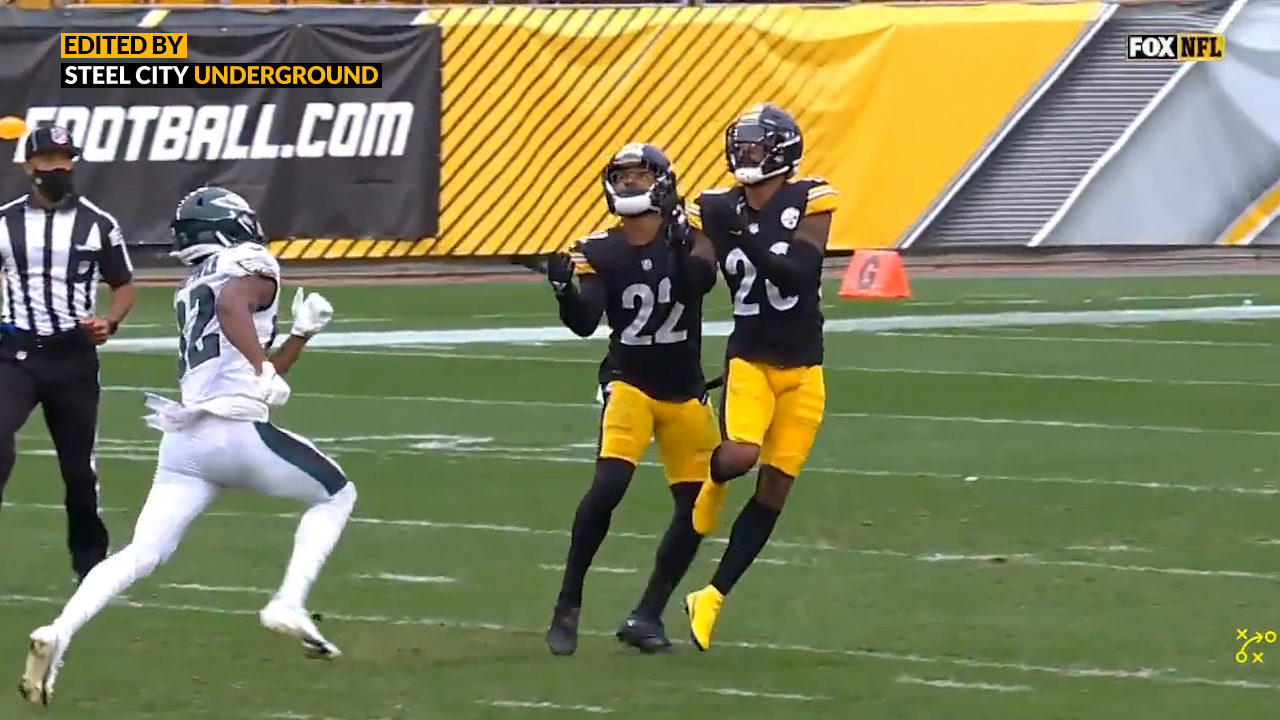 Plays of the Year: Steven Nelson puts a fork into Eagles comeback with second INT of game

The 3-0 Pittsburgh Steelers finally got to play another game, as their Week 4 scheduled game against the Tennessee Titans was postponed and their bye week swapped into the much earlier slot.

With the weekend off, the Black and Gold lapsed into the next game in Week 5, which featured the Pittsburgh Steelers and Philadelphia Eagles in what many call the “Battle of Pennsylvania”. The game was full of ups and downs as both teams had peaks and valleys in their play throughout the game. Ultimately, the Steelers were able to dig deep and get themselves back to the top of the mountain thanks to a play by cornerback Steven Nelson, putting a fork into a late-game comeback try by Carson Wentz and the Eagles offense.

In their first offensive possession after Chase Claypool earned his fourth touchdown on the day for the Steelers, the Eagles started at their own 25-yard line. Steelers outside linebacker Bud Dupree dialed up pressure and was able to get the Wentz and share a sack with Stephon Tuitt.

The defense was fired up and Wentz looked desperate as time continued to disappear from the game clock. The Eagles offense went to the no-huddle offense with Wentz in the shotgun and the short pass to Miles Sanders fell incomplete. On third-and-20, from their own 15-yard line, Dupree again applied pressure, forcing a connection between Wentz and Zach Ertz to go incomplete as well.

With everything on the line, Wentz threw a deep bomb that was pure despair and a horrible attempt. Admittedly, T.J. Watt was steamrolling right into his pocket (Stephon Tuitt coming in after) and Wentz was trying to avoid an ending via sack. The throw was too deep for rookie receiver John Hightower and went right to both Nelson and Cameron Sutton at the Steelers’ 25-yard line.

The ball actually landed in both Nelson’s and Sutton’s hands, but it was Nelson who secured it fully and got up from the turf with it. All Hightower could do was fall on top of the duo to end the play. The Steelers offense, then, just ran out the rest of the game clock, the final play the ‘victory formation’.

The interception was Nelson’s second in the game.

Earlier, in the third quarter, the Eagles faced second-and-ten at their own 15-yard line. Wentz attempted a short pass over the middle of the field to Ertz that Nelson was able to jump and return for a gain of three yards. The Steelers offense then took advantage with a pass to JuJu Smith-Schuster, a run by James Conner, accepted a penalty by the Eagles (pass interference) against James Washington, before Conner put the ball into the end zone and Chris Boswell kicked a successful PAT to put the Steelers at 31-14 on the scoreboard.