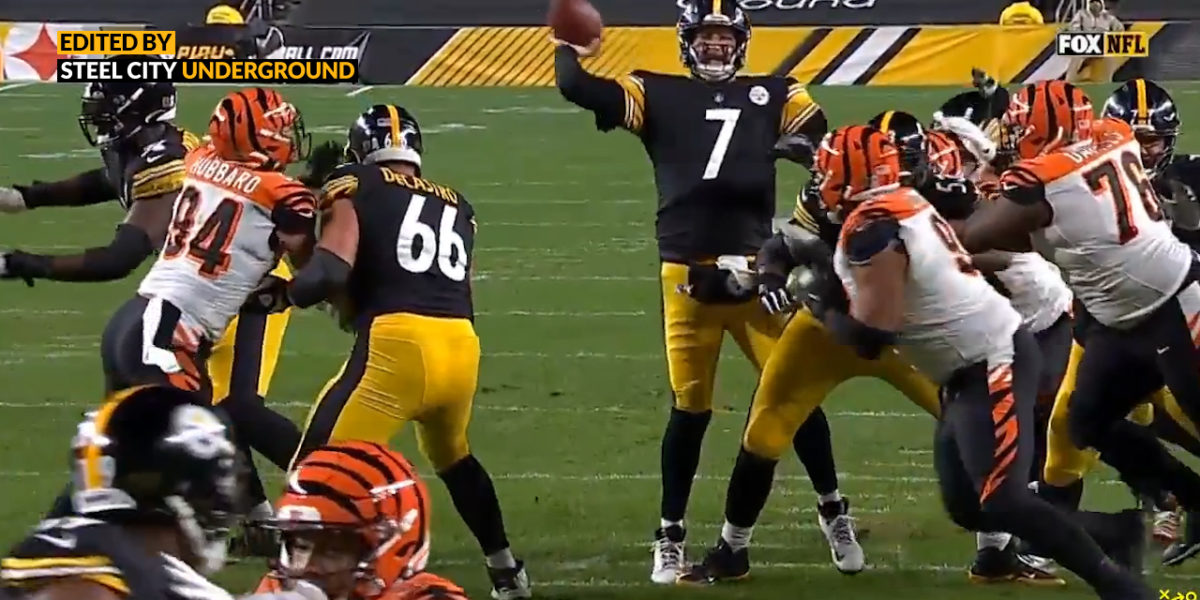 Entering Week 10 of the 2020 NFL season, the 8-0 Pittsburgh Steelers were scheduled to host their 2-5-1 AFC North division “rival” the Cincinnati Bengals at Heinz Field.

The unbeaten Steelers had trounced the Bengals head-to-head for quite some time heading into this matchup, where Pittsburgh had won the last ten straight games, calling into question any sort of “rivalry” despite the heated contests.

The game got off to a slow and awkward start, as the Steelers went for and failed at a two-point conversion, leaving something more akin to a baseball score up on the board as they had a narrow 12-7 advantage heading into the second quarter.

Midway through a season many didn’t think he could compete in, Ben Roethlisberger continued to impress. He also showed us why he is the master of the pocket.

In the middle of the quarter the Steelers were at a 3rd-and-Goal from inside the 10-yard-line. Big Ben lines up in shotgun formation with a bunch set (JuJu-Smith Schuster and Chase Claypool) and a stack on the left consisting of Diontae Johnson and Jaylen Samuels.

As Ben snaps the ball, the Bengals defense drops back to guard the end-zone.

Both Samuels and Johnson are wide open and JuJu runs a crosser into the back of the end zone as Ben gets pressured off the right side.

What we see next is the “old man” still gets shifty when he needs to! As he steps up in old Big Ben fashion he effortlessly lobs the ball right in the gap to meet JuJu for a score.

It is satisfying when you see the visible frustrations of defenders when they get beat. The reaction shows why when Roethlisberger gets in the zone, he is almost unstoppable.

The Steelers continued to make history in 2020, improving to 9-0 on the year with a walloping 36-10 victory.