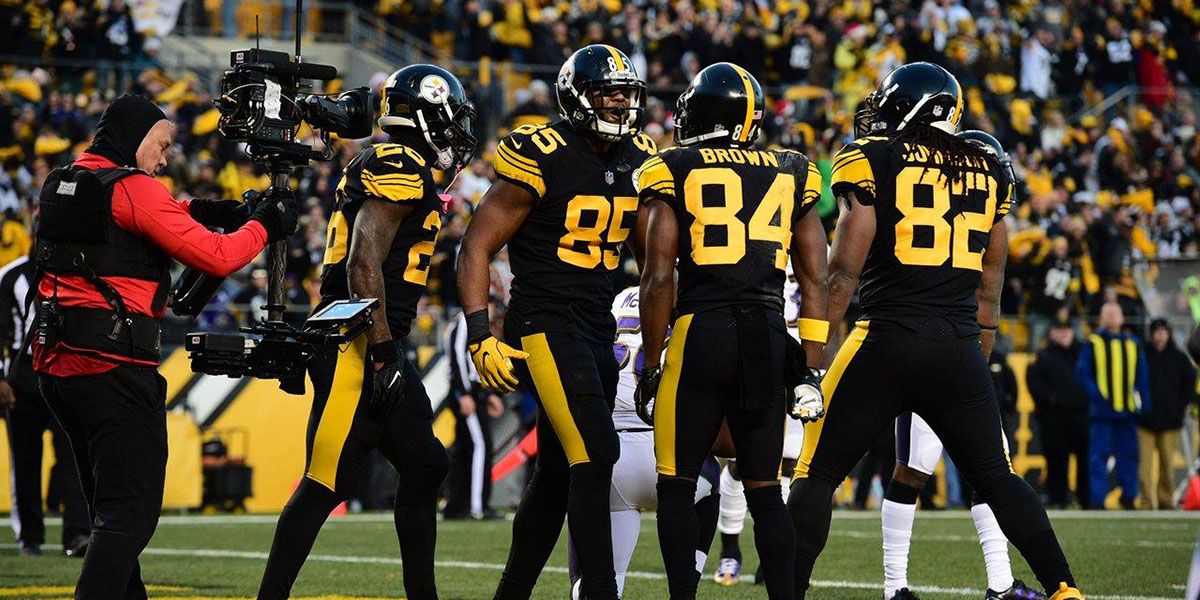 In last Sunday’s win over the Baltimore Ravens, several lower draft picks and undrafted players made big contributions in the game. We detailed some of these players earlier this week, but now it’s time to analyze what they did on film.

Nearly the forgotten man on the tight end depth chart following the return of Ladarius Green, and battling his own injury bug, the “X-Man” found himself in the lineup on Sunday, looking like a Green clone on this seam route.

Ben Roethlisberger, in a 5-wide shotgun formation (rarely seen this year) recognizes a mismatch with Grimble being covered by Ravens linebacker Albert McClellan. Grimble easily beats his man coverage off the snap, and attacks a giant gap left when Antonio Brown runs a short in pattern, with Baltimore only playing one deep safety.

Ben nearly had his pick, as the Steelers attacked the one-deep safety by also sending Eli Rogers from the other side (who ended up double-covered). I have no doubt that Grimble was the first option on this play, and Ben has a nice head fake toward Rogers to help sell the play.

Speaking of Rogers, he too would come up with several big plays in this game, such as the 39-yard gain below.

Fancy footwork played a part in Rogers getting open, faking outside, then moving in, once again, against a single-high safety.

Give credit to the offensive line as well, walling off Ben and giving the play time to develop. (The Ravens didn’t have a single sack on the day!)

Another tight end got in on the offensive action Sunday: “The Outlaw” Jesse James, who looked more like Jesse Owens on this play.

Watch as Ravens LB, and Pro Bowl selection, C. J. Mosley gets spun like a top as James jukes then sits in the zone.

If you pay close attention, nearly every Steelers receiver is open on this play:

I find that insane, considering the Ravens only rush three on the play! It’s as though they were so concerned with getting beat by Antonio Brown, that he’s the only player they covered on the play!

Tavon Young bumps Jesse James from his zone, but he doesn’t move on Rogers either, because it’s not man coverage. At the same time Mosley can’t decide whether to cover Rogers or James, and gets flipped around.

What a great play drawn up by Todd Haley!

Want some more unsung heroes from Sunday? Well look no further than plays such as this one.

Following a Sam Koch 43-yard punt to the Steelers 10, Pittsburgh trailed with about 10 minutes remaining in the fourth quarter.

What better way to start a drive than a handoff to, and 23-yard gain by, Le’Veon.

The announcers on TV correctly illustrated Bell’s shiftiness, but let’s not downplay how Steelers TE David Johnson also helps take Terrell Suggs out of the play. (If anything, DJ owns Suggs, as he has a feel that Bell can find the opening he makes.)

Another solid block downfield by Cobi Hamilton helps Bell add about 10 more yards to the run before going out-of-bounds.

I absolutely love the selflessness of this team: the receivers, who are mostly castoffs like undrafted Rogers and Hamilton, do whatever it takes to make sure they have a job in the NFL. In my opinion, these athletes play with a chip on their shoulder, not having the entitlement mentality of being a high draft pick. They’ve had to bite and claw their way into their positions, and it shows up on film week-in, and week-out.

That could be no more true of Demarcus Ayers, for which this same clip is used in a film room dedicated to the Steelers 7th round receiver.

Watch the block Ayers throws at the end of this play (top-left).

Eric goes into far more detail, but as you see throughout the article, Mike Tomlin and company aren’t joking when they say the “Standard is the Standard”. Jesse James was taken in the 5th round, Ayers in the 7th, Hamilton and Grimble are undrafted practice squad journeyman, and the Steelers got a steal by signing undrafted Eli Rogers in 2015.

Oh, and we often forget that Antonio Brown himself is a 6th round draft selection… but you wouldn’t know it by the way any of these guys play!