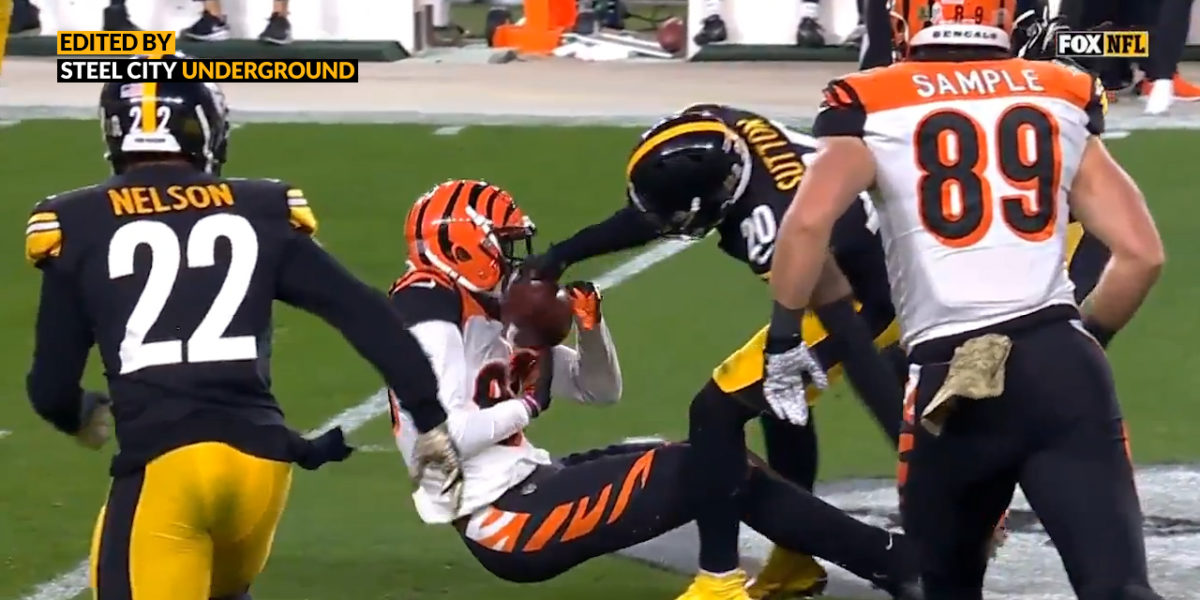 The Pittsburgh Steelers were able to hand the AFC North rival Cincinnati Bengals a 36-10 loss and move to 9-0 for the first time in franchise history on Sunday. Part of that success came from solid play from individuals on the Steelers roster from a positional standpoint, leading ultimately to yet another team win overall.

Prior to the Week 10 game, chatter about how big of an impact Bengals receiver Tyler Boyd has played in the Bengals’ offense was frequent. Boyd entered the game as Cincinnati’s top target for quarterback Joe Burrow. In his first eight games, Boyd had 54 catches in 68 targets for 584 yards and three touchdowns. He was chasing just under 200 yards after-the-catch as well. His reception numbers were good enough to rank him fourth in the AFC and ninth in the NFL.

With questions about Mike Hilton‘s availability on Sunday, Steel City Underground looked at how the Steelers might lock down Boyd and cover the slot receiver position. We predicted that Cameron Sutton, who has been playing well in the ‘nickel’ position for Pittsburgh’s defense this season, would play a major factor in that area. On Sunday, Sutton came through big as the first quarter wound to a close.

Late in the first quarter, Burrow was able to hit Boyd for a 20-yard completion but Sutton would not be denied from making a move on the very next play. Tee Higgins, the Bengals’ second-leading receiver this season, was Burrow’s target for a short pass in the middle of the field on 1st-and-10 with just 0:17 seconds left in the period. Burrow took the snap from the shotgun position and thought Higgins had an easy catch and another possible first down. Higgins did control the ball at the initial catch but Sutton didn’t allow him to hold it for long, making contact and then strongly stripping the ball right back out.

Sutton showed tenacity in creating the turnover, not allowing Higgins to be down by contact before the ball was dislodged. Steven Nelson was able to recover the second Bengals turnover in the first half at Pittsburgh’s 45-yard line.

Ultimately, the Steelers defense would limit Boyd and Higgins to just 13 catches for a combined 148 yards. By playing tighter coverage, Pittsburgh was able to keep Burrow from getting hot, allowing the rookie quarterback to complete just 21-0f-40 pass attempts (52.5 percent), a rating of 76.4 (adjusted QBR of 45.4) – his worst performance since the Oct. 11 loss to the Baltimore Ravens – and one touchdown while sacking him four times.